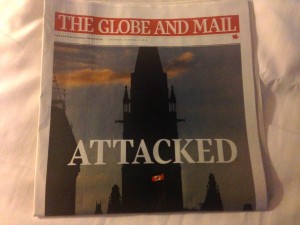 I left on a Wednesday morning flight and it wasn’t until I landed on the tarmac in Ottawa that I received a text message from my oldest saying, “I guess you’ve heard the news.” I hadn’t heard anything as my cellphone was off during the flight. My first thoughts were those of a mother, fearing there had been an accident to someone in the family at home. I quickly searched the news on my phone and found a gunman was in Ottawa. There was more than an accident; a young guard at the National Monument had been shot down. And yes, he had a mother. It was she who had lost her son in a a tragic and senseless shooting. “There is a man who would give his life to keep a life you love beside you,” says Sydney Carton in A Tale of Two Cities. 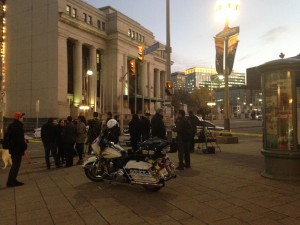 It was a very surreal and eerie trip. As the chauffeur drove three of us from the airport to the Fairmont Chateau Laurier (right across, and I mean right across, from the War Memorial Monument where the murder had taken place), we noticed that although the city lamps were brightly shining there was hardly anyone on the deserted streets. Stores and restaurants were completely closed and darkened, their neon signs off. The city was in lockdown.

Our hotel was also in lockdown. The doors everywhere were locked, the street taped off with red police tape, police vehicles blocking off streets that were closed, reporters with cameras and microphones staged behind the red tape cordoning the hotel. We could not go in the front or side entrance but police directed us through a back door. Inside the lobby of the hotel and even boarding the elevators were police in bullet proof vests, guns tucked in holsters. At that point there was still rumor of a second gunman. The letter under the hotel door from the manager advised us of the circumstances and asked us to remain inside the hotel. From my room I heard sirens wailing and could see the lights from police cars through my window. The whole situation didn’t seem very Canadian; events like this don’t seem to take place in our quiet and reserved backyard. And for me, locked in the hotel, Ottawa was my backyard.

The next day lockdown was lifted and so we went on the scheduled school tours arranged by those organizing the Canadian Academic Leadership Summit. There were hardly any attendees, however, as almost all of the registrants from the remaining provinces cancelled their flights when the city went into lockdown. Those of us from BC and California had already left on flights and so we did not have the opportunity to cancel. Our gracious hosts, despite the national trauma the day before, continued to open their school doors, classrooms and hearts to us. There is something so normal about being in a school and about having children all in their places.

“It was the best of 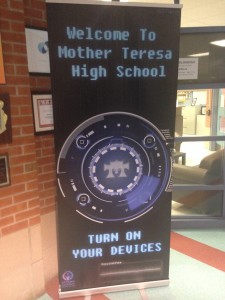 times, it was the worst of times…” In between all that oddness, visiting the schools was more than a pleasant distraction. We spent our morning at Mother Theresa High School and were greeted by student ambassadors that guided us through the school to the Learning Commons. It was there that we joined some staff and students for a First Nations Talking Circle. Led by the school secretary we each had the opportunity to hold the “talking feather” and provide an introduction of ourselves. The talking feather was then rotated to the students immersed in our circle where they each described their personal story of learning at the school. 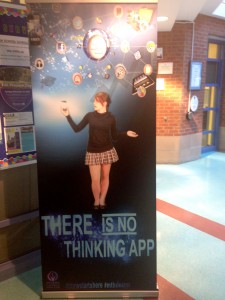 Upon completion of the storytelling, the staff guided us through classrooms to ask teachers and students about the learning. In the English class, some students were studying Of Mice and Men and every student was engaged in exploring and learning about the novel in different ways. One student was studying the music of the era and then applying her understanding of the lyrics to explain the cultural background for the story. Another student was creating a movie trailer while a different student was writing an alternate ending. There wasn’t a student in the room completing the same task. Devices were everywhere because at this particular school all students bring a mobile device (iPad) with them. The school has back up devices for those that don’t have their own but basically everyone has a device on their desk. In many rooms, students were using them but in other classes students were engaged in group work or whole class work without accessing technology. The devices didn’t seem really noticeable as students and teachers were simply engaged in the learning process. The school purchases the licenses for the apps that students may want to use and some of the apps have also been created in-house. They also use Google Apps for Education. I did learn that the school does have “sticks” that students can sign out should they require wireless access at home to complete assignments. Overall, there is minimal district tech support provided and trained students are there to give a hand to students and staff.

The Senior Staff at the Ottawa Catholic School Board Office hosted us for lunch and a conversation about their journey moving their district into the 21st century. It was here that we had a chance to learn more about the district’s priorities and strategic plan, their organizational structure and departmental functions and their mode of both independent and interdepartmental governance. The district had made some pretty significant budget decisions that impacted all departments as they looked across their systems to find ways to funnel monies to newly determined priorities, many directly associated with technology. 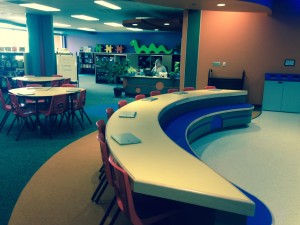 On our afternoon visit we landed at St. Cecelia Elementary School, nicknamed the “School of the Jetsons.” This newly designed school appeared spacious, open and inviting. The Learning Commons had a completely exposed wall along the central foyer. The only separation was the curved bar with stools where chrome books lay out on counters and tables as options for incoming students. Glancing down the hall you could see groups of students working in “caves,” small alcoves with assorted furniture—comfy chair

s, benches, tables—where students were spread out working on different tasks. Classrooms were structured in pods with a shared central area for students together in groups or for independent work. While the school has opportunities for whole group and direct instruction, we had arrived at a time of day when most were involved in individual or group work of their choosing and related to their personal interests. What were students doing? Some were reading in corners together, others were in a group watching a science-related video, others were using math tiles to explore patterns to extend their learning, some were standin 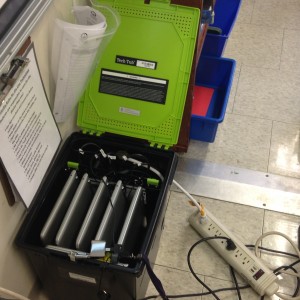 g and manipulating shapes across a projected Smart board and others playing games, puzzles, or huddled together engrossed in learning conversations. There were chrome books, netbooks, desktops and iPads being used seamlessly throughout the building. They weren’t really noticeable as what was more evident was simply students engrossed in learning.

On Friday it was an intimate crowd of about a dozen of us. I was one of the speakers but it is significantly different when you are only speaking to a small room of people. I guess because it was such a small crowd we had opportunities for great dialogue with some pretty amazing and humorous people. I love learning and I particularly appreciate the opportunity to have a window into the ways and thinking of other districts. I found the goals, direction and plans of the district future-oriented, declarative and provocative. I found the flexible learning of the students inspiring. In between the visits, the lunches and sessions, however, it was the opportunity to engage in a rich dialogue with those from the school and district. The shared stories of their journey to a new future, their ongoing plans and challenges as they pursue creating great environments for learning was encouraging and kindled hope for our future.

“I see a beautiful city and a brilliant people rising from this abyss, and, in their struggles to be truly free, in their triumphs and defeats, through long years to come, I see the evil of this time and of the previous time of which this is the natural birth, gradually making expiation for itself and wearing out…” Charles Dickens.

We flew home late that afternoon as the lights began to shine across the city. 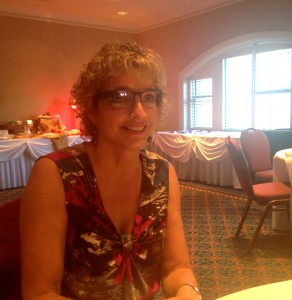 l thanks to our gracious and flexible Ottawa guide, Denise Andre (@deniseandreOCSB), Deputy Director of the Ottawa Catholic School Board, and the inspiring and amazing hosts from Discovery Education who organized the event. Author tries out Googles Glasses compliments of Summit Keynote Hall Davidson (@halldavidson).

6 thoughts on “The Best & The Worst of Times”